So we had the second firing of our wood kiln at John Bryan Community Pottery Sadly I haven't had time to load the pics separately on here just yet. But they are on both facebook and etsy!
Posted by J. e. Manning at 7:41 AM No comments: 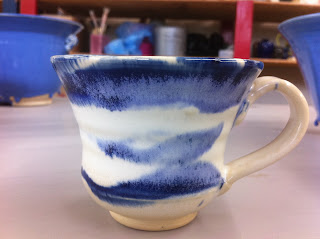 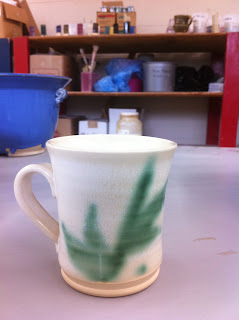 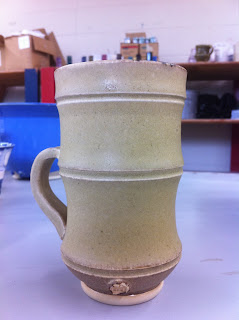 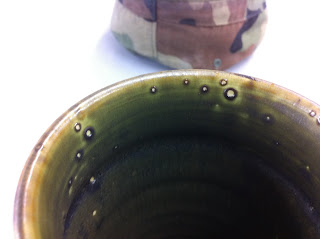 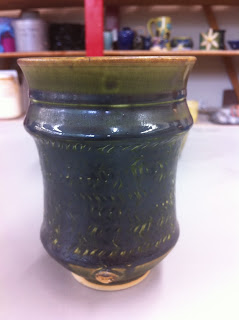 Some new pots here. The top two are a buttery satin white glaze that breaks clear with oxide washes of cobalt and copper. I really like where the cobalt mixed with the white and made little lavender crystals, something to experiment with later! the third pot down is my new bamboo brown glaze, it has a lot of great subtlety in it when viewed up close and personal!

Now for the bad... The bottom two pots are another local clay/ wood ash glaze like the bamboo brown (in different ratios) with an addition of copper carb. I added too much copper and mixed the glaze too thick so it had these bubbles that didnt heal over. I'm going to try adding some soda ash, mixing it thinner and reducing the copper... we will see.
Posted by J. e. Manning at 11:59 AM No comments:

As artists we often struggle with the jaberwocky that is pricing... The real beast is the conflict between a need to make enough off of our work to live (hopefully in a comfortable fashion) and what the public is willing to pay. Now I personally have two views on this subject that affect my thoughts on how I price my work.

First and foremost is that work should be equal to its price! There is far too much garbage out there that is priced way above

That being said I have a way of working that figures price out for me. I said to myself: "self, what sort of living would you like to make?" The answer to this question is that I would like to make a billion dollars a month, however I am aware that this is a bit far reaching for anyone other than billy boy gates and especially so for an artist. So for a more reasonable way to figure pricing I took the money I make as a soldier (if active it comes to roughly 55k a year), which is a nice income that I live with very comfortably. I then factored in the fact that I am an "emerging artist" and came up with a sum that I could survive on (25k would allow me to pay bills, eat, and have frugal fun). However the goal of life is not to just survive so I factored in a growth rate, I would like to also save 5k a year to my savings (minimum), and I would like my income to increase by 2-6k a year.

So the base income that I would like to make via my work is 30k per year. This comes to an hourly wage of about 15 dollars, now this is a base salary. The fact remains that I have yet to be granted a letter to hogwarts by either an owl or a bearded half giant on a moterbike, so I cannot magic up my materials with the wave of my wand. So I double my hourly income to 30 dollars and work more than 40 hours per week, I haven't done real "math" on the figures but my hillbilly calculations tell me that this will make up for work not sold, taxes, and material/ firing costs... in an ideal world. Of course the truth is I could get stuck with a whole lot of work that doesn't sell and that's just life. Cheers!
Posted by J. e. Manning at 8:51 AM No comments: 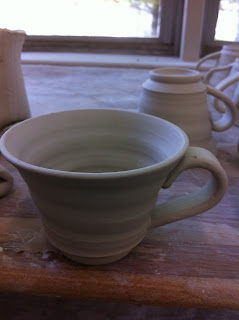 Had a few hours to spare today so I went over to the classroom to start the kiln and trim some pots I threw during my last class. I like these new mugs, they're more like a traditional teacup shape. 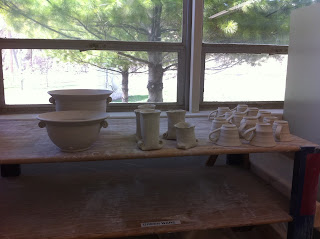 Here is a shot of the greenware drying. I know that some people wax one side of the handle, however I have never done this. I've had good results by just turning the mug upside down. 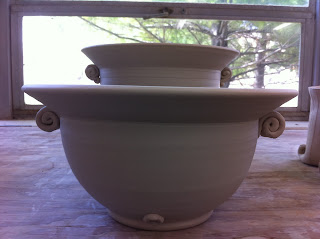 I like handles, in fact I look for any reason to put a handle on something. These handles here are flat out useless, but they give a nice feeling of antiquity to the pot. 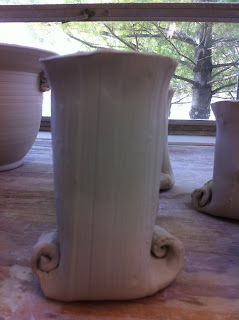 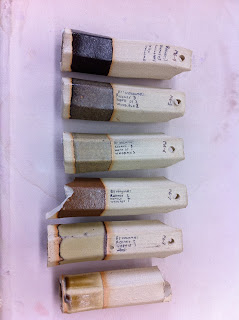 So now that I'm done with school I am using an electric kiln in lieu of my beloved soda/ wood firings. That being said I wanted a way to get similar glaze effects. I have also been curious about using local materials (or relatively) to reduce the old carbon footprint. With that in mind I decided to use redart (while a commercial clay it is from here in ohio) and woodash (from fireplaces and thus free).

So the next bit of reasoning to go into the process was what other ingredients to use and what sort of blend I wanted to go with. I knew that I wanted these two ingredients for ecological and economical reasons, yet for the purposes of a more stable glaze I wanted to add a feldspar. I decided on a feldspar only (rather than a more typical quadraxial blend with the glassformer silica added also) for two reasons; first: the clay, woodash, and feldspar all have some silica in them, and second I have limited time to work on glazes as this is a side project in my new classroom. Now for the feldspar choice, I went with Nepheline Syenite which while it is from canada is still on the same continent and has a lower melting temp which made it more suitable for cone 6 rather than cone 10.

These are the 6 tiles from a 15 tile blend that I will be testing into a weight value (the tiles were origionally tested by volume) and then adding colorants. Although I will keep the bases to them without colorants because I personally love the earthy tones that the redart provides.
Posted by J. e. Manning at 5:11 PM No comments: 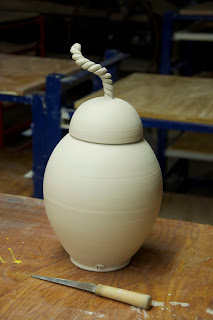 I put my fetling knife in the foreground for scale. It's easy sometimes for us potters to list the size of a pot, however that doesn't always compute to holding it in our hands. I tried something new with this one that I think may help with trimming things over 12 inches that and narrow necked. I know their are chucks to use but I like using a heat gun to trim before I cut it off, then I can throw a chuck or use a ready made one to trim the foot.
Posted by J. e. Manning at 6:19 AM No comments: 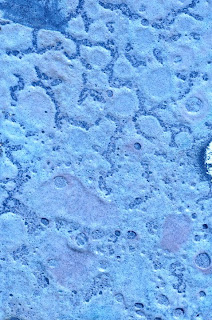 Usually I am angered at the mess others leave at our schools salt kiln (a problem that I thankfully I will not have to endure for much longer since I have only ten credits left). However yesterday my buddy Nikki Strouss and I were getting ready to fire, and after a brief moment of rage at the last person that fired having not cleaned off the shelves I noticed this salt buildup that bubbled and had these great blues, lavenders, and pink colors. I almost felt bad cleaning the shelf off... almost.
Posted by J. e. Manning at 5:36 AM No comments: 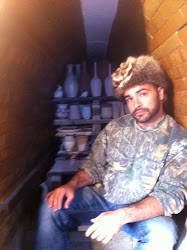 I am a potter and ceramic educator in the Dayton Ohio area. In 2010 I Graduated with a BFA in Fine Art/ Ceramics from the Columbus College of Art and Design and in 2012 I earned my M.Ed. from Wright State University. Prior to being an educator or student I had served four years on active duty and since have served six with the National Guard. I now however spend the lions share of my time making pots for all of you to enjoy, cheers!